UNIVERSITY OF KENTUCKY BALLPARK – UNDER CONSTRUCTION

The cost of the stadium, which will give UK baseball a state-of-the-art home on par with its peers in the Southeastern Conference, will be $49 million. The new stadium – which is yet to be named – will be located off Alumni Drive between the new Kentucky Football Training Facility and the Wendell and Vickie Bell Soccer Complex, adding to the cluster of UK Athletics facilities in the area.

The stadium will feature permanent seating for nearly 2,500 fans with additional space on grass berms to accommodate a total of more than 4,000 fans for regular-season games. Beyond the outfield wall, temporary bleachers can be installed for NCAA Tournament games to bring the seating capacity to more than 7,000. Fan amenities also will include suites and a new club area. 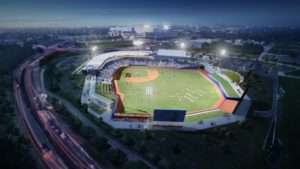 The team areas will give Wildcat students and coaches everything they need to compete at a high level in a single location. The new stadium will feature a team lounge, locker room, training area, indoor hitting and pitching areas, and coaching offices, as well as a recruiting room. All spaces are either new to UK baseball or significantly larger than ones currently in use.

The design for the anticipated new home for Alabama Baseball will enhance the game day experience for players, fans, and VIPs. The expansion will increase the size of the facility currently 32,801 square feet by 96,199 square feet. The new stadium will be 129,000 square feet. The renovations call for the demolition of existing food service areas, restrooms, locker rooms, press box and other concourse functions. The renovations will include a new outfield walk that connects with the concourse, a playground and mini infield for families, a pregame picnic area, team store, commissary and new seats. New player amenities including a home team locker room and lounge, showers and restrooms, meeting room, weight room, bullpen, and four lane indoor batting facility. New fan amenities include improved sight lines, a concourse with easy access to restrooms, improvements to concessions, additional seating, three club lounges, a homerun berm and a student section. 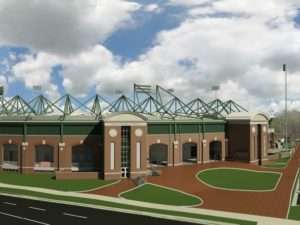 The stadium, which will be built at an estimated cost of $56 million, is considered the centerpiece of a $350 million DoNo (Downtown North) development project.Housing, offices, a grocery store, parking and a brewery are also planned.

Substantial completion of the ballpark is expected to occur by March 2016. The stadium design incorporates 18 luxury suites; 6,000 fixed seats with “backs, armrests and cup holders;” two party decks; two picnic areas/patios; state-of-the-art fan interactive areas; and modern amenities commensurate with comparable stadiums. Whereas the press box is usually up on the suite level, away from the fans, it has been placed on the concourse and wrapping it in glass. The bullpens have been integrated into where the seating is, and fans will be able to sit very close to the field. It will be an intimate ballpark, where fans can interact with the players. There will be a 360-degree concourse, a microbrewery, local fare from local merchants, a great state-of-the-art sound system and scoreboard. 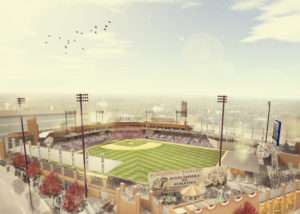 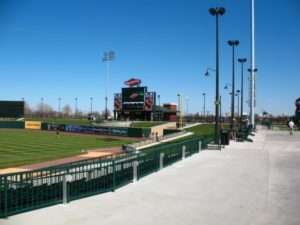 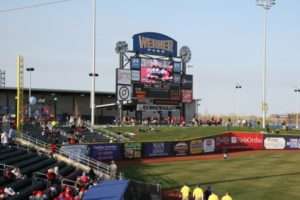 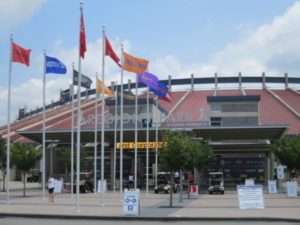 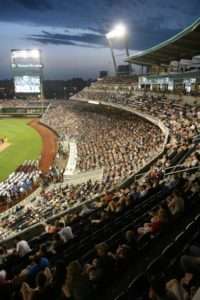